BRICS Access, a company specialised in partnerships between French companies and their counterparts in emerging countries, has its headquarters in Paris. BRICS Access leads a network of local contacts in Moscow, Rio and Beijing, and is led by Gérard Wolf, 59, a graduate of the National Agronomy Institute (Paris) and Sciences Po Paris.

At EDF from October 1998 to the end of 2013, he had several roles: principal private secretary to the President F. Roussely until March 2001, then director of the Group’s Coordination (2001-2002) and member of the Executive Committee, director of the Group’s Divisions (2003-2004). During P. Gadonneix’s presidency he was a member of the Executive Committee, director of “Development and Major Projects”, and then International Director (2005-2009), a role he retained until 2012 under the presidency of H. Proglio. In 2012 and 2013, he was the Senior Executive Vice President in charge of relations with international financial institutions. From 2005 he steered the majority of major fusion/acquisition operations as well as nuclear projects outside the USA (China, Emirates, and Italy etc.). He signed several partnerships in the Energy Sector with operators in China, Brazil, Europe and Africa.

Before joining EDF, between 1981 and 1998 Gérard WOLF occupied several territorial posts in the prefectural administration, as well as positions of responsibility in several government ministries, notably with Pierre Joxe and Edgar Pisani.

Gérard WOLF is currently a member of the board at MEDEF International, and President of the ‘France-Southern African Business Council’. He has headed several official delegations in this region, as well as with organisations of the World Bank Group. Lastly, he regularly acts of behalf of MEDEF-i.

Married and the father of a 26-year-old daughter, Gérard WOLF speaks four languages and is the head of several sports associations.

Engaging in co-development with local companies in Africa

Sustainable development and CSR in companies. 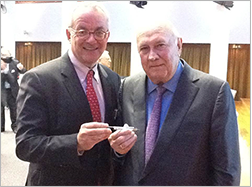 Exchange with FW de Klerk, Nobel Peace Prize winner and former President of South Africa at the last General Assembly of the ‘Global Leadership Foundation’, presided by FW de Klerk, and of which Gérard Wolf is a member. 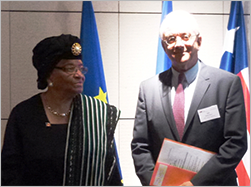 Meeting with Ms Ellen Johnson Sirleaf, President of Liberia and winner of the Nobel Peace Prize, and around thirty French business leaders, during her official visit to France. 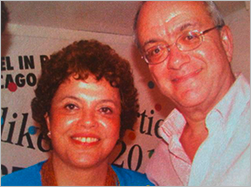 Meeting in Rio with Dilma Rousseff, then Prime Minister, during a promotional event for the 2016 Olympic Games. Subjects discussed: sustainable development and clean energy for the future Olympic sites.